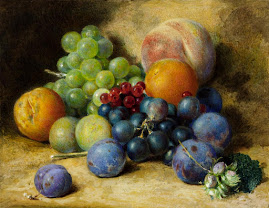 For vague health reasons, I have been making a valiant effort lately to Eat More Fruit. The problem is that I really don’t like fruit. I’m a huge fan of vegetables and will happily munch on all manner of veggies and green salad multiple times a day, but I’ve never been a fruit fan. For one thing, citrus hurts my stomach and if I’m going to eat an orange or a tangerine, I have to have crackers or bread first to “pad” my stomach so I don’t get sharp acid pains. In general most fruit, citrus or not, is just too sweet and syrupy for my taste. I’ve been experimenting mostly with berries, which seem more manageable than contending with an entire apple or a grapefruit, but they go bad fast and I can only bring myself to eat three or four at a time. I end up with a container of hairy berries in the fridge that I have to toss out. I tried on several occasions buying overpriced strawberries on the verge from a vending machine at work (we don’t have a cafeteria anymore), but I could only stomach a few of them before I tapped out on the over-sweetness and simultaneous tartness. I had plans to try mangoes again, as I dimly recall liking them and being able to eat them without stomach upset, but I can’t seem to find them in my local grocery store. I’m also okay with melon. I used to enjoy pre-packaged medleys of cantaloupe and watermelon at work, but can’t find that anymore either. Chopping them up myself just seems like way too much work for something I’m not that interested in eating. I’m afraid this fruit experiment is going to fizzle out rather quickly, which I feel sort of bad about, but then again I’m not morally obligated to like fruit. I eat plenty of healthy-ish things and I don’t see any reason why I should have to force down fruit against my will and taste.

It’s a strange thing to be proud of, but yesterday I got in the car and drove for the first time in probably over four years. Until recently, I could walk to work, and when I got assigned additional campuses, my company gave me a Lyft pass, so there was never a need to drive to work. With COVID, there was nowhere to go anyway, hence, no need to drive. I hate driving and it’s been very easy to avoid it entirely these last few years. But yesterday I needed to take a jaunt out to my local big box store (which turned out to be a complete dystopian nightmare that I will detail at another time), and I started to walk the three miles and got too hot and annoyed and turned around and hopped in the car for the first time in as long as I could remember. It was a bit odd, but okay. I assumed that had I forgotten everything about driving, but my body just sort of launched into gear and I remembered what to do and how to switch lanes at the construction site and how to keep pace with the traffic and all of the basics. It was no big deal at all, nothing like I had built up in my mind. I’ve resolved to drive around the neighborhood at least once a week from here on out to ensure that I keep in practice.

One of the things I needed to get at Dystopian Big Box Store was flat Converse shoes, because my trainer announced last week that we are going to do an actual, proper deadlift on the bar at our next session. Up until now, I’ve been tinkering around doing Romanian deadlifts on a forty-pound barbell, and she thinks I’m finally ready to move on to the real deadlifting mat. You’re supposed to have flat-soled shoes for deadlifting, although I’m not really sure why. I think it has something to do with lessening the height of the bar for the lift. At the point that I’m at, it really doesn’t matter that much—I will only be lifting an unloaded bar—but I wanted the shoes for the future because I’m harboring the delusion that I may turn into a monster lifter someday and will need them for competitive purposes. It turned out, DBBS does not carry Converse brand anymore, which I found a bit shocking, and the only pair of flat-soled shoes in the entire store that came in my size were pink. So now I have pink shoes for lifting. It’s not my preference, but I feel lucky to found have anything at all in DBBS. When I asked about business casual pants, the clerk looked at me like I had three heads and said that they haven’t carried business clothes in years. That used to be a basic staple of that store. And don’t even get me started about the boot situation. It was grim, folks. Really grim.

Here’s a lady in gold hot pants explaining how to do a deadlift. Enjoy!

Posted by Kristen McHenry at 10:56 AM