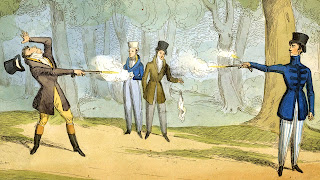 As a side effect of my new-found interest in the American Revolutionary War, I recently went down an internet rabbit hole on the practice of pistol dueling. This is about the last thing I ever thought I would take an interest in, but I can’t stop reading about it. There was a highly complex and elaborate set of rules surrounding this extreme-by-today’s-standards ritual that I find fascinating. But more than that, I have been thinking about the parallels between the 17th and 18th century obsession with honor, and today’s obsession with respect. I try very hard not to apply the thought standards of today’s world to an era two or three hundred years ago, but as I was reading more about the infamous Burr vs. Hamilton duel, I found myself doing exactly that. The night before the duel, Hamilton wrote a mournful missive about how much pain and devastation it would cause his family and the country if he was killed in this duel. Knowing that his promising young son died in exactly the same manner only three years earlier, I found myself mentally beating my head against a wall and internally shouting, “You don’t have to go, Hamilton! Just don’t go. Don’t get killed over something as ephemeral and indefinitive as “honor.” But as I read more about that era and dueling, I came to understand that honor was indeed a very real thing. It may seem silly to us now, but to lose honor could hurl someone into career and financial ruin and cause never-ending shame. Honor was taken very seriously—so seriously that a pistol duel was considered a reasonable response to an insult.

To be fair, it seems that the majority of these duels were mostly just theatrical posing and were ended without harm to either party as soon as it was satisfied that both had saved face. If it went as far as firing, shots were usually “wasted”--fired into the ground (which is nonetheless very dangerous.) I’m hardly an expert, but my understanding is that most of the time neither person was intent on harming the other, but they had to go through the elaborate ritual anyway. However, this perilous practice was beginning to be banned in many states around the time of the Burr vs. Hamilton duel. Ironically, in New York, the penalty for dueling was death. Ah, the things one learns when one spends too much time on the internet.

At the behest of a long-time poetry mentor and friend of mine, I made a commitment recently that I’m both nervous and excited about. I’ve agreed to write and post one new poem per month on this blog. There, I’ve said it publically and now I’m accountable. For a number of reasons I’m not going to detail here, I’ve been in a hopeless funk for a long time about writing poetry and have struggled to find the calling. So I appreciate this nudge—or more like the light kick in the pants I needed to get going again. Because I am me, of course I decided to re-start this endeavor by writing a sestina about the Burr vs. Hamilton duel, but quickly discovered that this was far too ambitious a plan for my weakened, out-of-shape poetry muscles. It’s like when I go ham at the gym after a long absence and end up debilitatlingly sore the next day. So I’m going to start with something a little simpler and work my way up. I can’t guarantee when the first new poem will show up, but it will be some time in January. I also offer no guarantees as to the quality or literary worth of any new poem. However, if you insult one of my poems, I shall challenge you to a duel!

Enjoy this brief video on the basics of dueling:

Posted by Kristen McHenry at 11:05 AM

The gauntlet is cast. And I can't wait to see again the poetry of Kristen McHenry booming and banging and thrusting and parrying throughout cyberspace! 😎