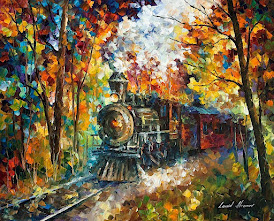 This weekend Mr. Typist told me about a Danish artist who was paid $84,000.00 by the Kunsten Museum of Modern Art to do a painting, and in turn handed in a blank canvas entitled, “Take the Money and Run.” Although I ultimately contend that’s theft, I must admit it’s a pretty good troll. I’ll leave the philosophical debate to those smarter than myself, because what I really want to talk about is my super-embarrassing train painting that Mr. Typist insists on displaying above his desk in the computer room. I die a little inside every time I look at it. You see, some number of Mr. Typist’s birthdays ago, I got a little over my skis and decided that I was going to give him a “unique” present in the form of a train painting. I didn’t consider my skill level, experience, or dexterity; I just plunged full speed ahead with the acrylics. Once I started, I got too deep in to stop. This thing took forever, with numerous false starts, corrections and cover-ups. I knew it wasn’t really working out, but I had so much effort invested into it I felt like I had no choice but to see it through to its inevitable and ghastly conclusion. The result is the jenkiest train painting I’ve ever seen. For starters, something went terribly wrong with the steam. I don’t know happened, but the steam is basically a gigantic, thick gray mass that takes up way too much space and instead of being wispy and ethereal as intended, it looks like a hoary blob monster. The train wheels didn’t work out, so I covered them up with snow, making the train look as though it sank in a blizzard. There are other problems as well, although in my defense, some of the trees look okay and the sky came out passably. The bottom line is Mr. Typist mysteriously loves it, so I’m stuck looking at it. Despite my abject failure in that particular venture, I would like to pick up acrylics again. I find painting relaxing. (Note-the painting pictured here is not my painting, obviously. My painting is not open for public view.)

As promised, my trainer took me through my first “real” deadlift last week! It was on an unloaded bar that she set on two thick pads so as to raise it off the floor to decrease the distance of the lift, but still. I did it! Now I’m already inpatient to move on to a loaded bar, but she wants to increase the distance first, and then consider adding plates. I understand that she wants to go about this methodically, which is the correct approach, but now that I’ve had a taste of it, I’m eager to be one of those people who march up to the rack confidently and start throwing around 100+ pounds. I know I just need to be patient and prioritize not injuring myself, but I’m very excited and I’m really wanting to test myself now.

A few posts ago, I mentioned a forest simulator (aptly titled “The Forest”) which is a mostly peaceful game except for the cannibals. I go along having a nice time in the beautiful woods, chopping down wood for my houseboat and making herbal remedies from the local fauna, when suddenly out of nowhere there will be an ungodly, terrifying screech and a deformed mutant sets upon me. I don’t care to fight, so I started waiting them out in said houseboat, which I thought was a genius move since they won’t cross into the water. I was perfectly content watching them scream and run around on the shore until they got bored and left, but then one of those bastards came back with an arsenal and started throwing Molotov cocktails at my houseboat! I was completely outraged. I made my own collection of Molotov cocktails, fully intent upon revenge, and the next night found myself in a full-on fire fight with that jackass. Unfortunately, he’s very nimble and zig-zaggy so it was hard to get a good aim, and I had to swim out to the abandoned yacht to get away from his relentless attacks. But I’m not deterred. I shall get revenge, my chickadees. Oh yes, I shall.

I was very impressed by this review of “The Forest.” I thought it was spot on and made some really intelligent points. Enjoy!

Did Dr Freud guide your spelling of "inpatient" there? I hope not :-)