Adventuring Practice, The Lilt of the Sea, Commercial Collusion 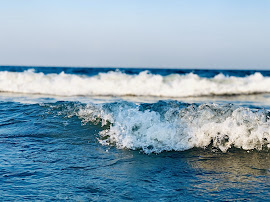 We went away for a few days last week to my happy place, Ocean Shores, where I am always drawn to when I am in crisis, in need of a deep rest, or on the precipice of some major change in my life. While I don’t always immediately find the answers I am looking for there, it’s always been a place of peace and healing for me. I need the reminder that there is something larger in the world than my minuscule life, that there is a roaring, shining, glorious ecosystem with a thundering heart that goes on without me and will continue to do so even after I pass. Besides all that metaphorical stuff, I am just a plain old sucker for ticky-tacky beach stuff. I love all of the souvenir shops with their bright, cheap, silly wares. I love salt water taffy, kites, renting scooters, and all of the other touristy entrapments. It all delights me and makes me feel uncharacteristically light and care-free. And my creative block was lifted by the lilt of the sea, and I started a new poem for the first time in ages.

It was an amazing trip, but not without its anxieties. Between life, work, and COVID, I hadn’t traveled anywhere at all in about three years, and I was totally out of adventuring practice, even for a short jaunt out of town. I’ve never been highly anxious about COVID, but I haven’t been cavalier about it, either. I would say that I’ve been medium-anxious. But I admit that the thought of traveling to a tourist hot-spot during a surge made me nervous. In addition, I was nervous about traffic and about adapting to our accommodations and about packing the Goldilocks amount of food—not too much, not too little, since there are dietary issues and I had to prep and plan for three meals a day plus snacks. I was nervous about the car, which is old and out of repair. I was nervous about running out of dry socks and packed way too many socks. The whole first night in I couldn't sleep because I was startled by all of the strange noises and thumps and slamming of doors in the distance and the refrigerator going off. Eventually I calmed down and got used to the strange noises and adapted to everything, but it took me longer than it normally would. I’m rusty at all of this. I need more frequent practice, and I plan to get it.

Besides walking on the beach and driving around rubber-necking at the astonishing number of blah, nouveau-riche beach-side houses that have been hastily constructed over the last few years, Mr. Typist and I watched a lot of classic movies on cable TV, which is all they had at the condo. Cable TV meant commercials, which I haven’t been subjected to in ages since we stream everything now. I was utterly gobsmacked at the astounding number of commercials for pharmaceuticals and fast food. It was like a perfect dance of marketing—three commercials in a row for pizza, cheeseburgers, and deep-fried chicken nublets, followed by commercials for diabetes, weight control and cholesterol medication—over and over and over again. It would have been laughable if I didn’t know that millions of Americans still spend an inordinate amount of time sitting on their butts watching this crap for hours a day. Mr. Typist and I finally made a game of it by trying to predict how many medication side effects each pharmaceutical commercial would list. Mr. Typist was a pretty good predictor. The average was eight, with twelve being the high-water mark. Evil commercial collusion aside, we watched some great movies I haven’t seen in ages—among others, Back to the Future, O’ Brother Where Art Thou, Deep Impact, and some flick where Jennifer Lawrence and Ben Afflick are stuck on a giant spacecraft with a failing nuclear reactor. It was lovely watching all of these movies with the sea heaving and rolling just outside our window and having nothing to do and nowhere in particular to go.

Enjoy this hilarious pharmaceutical commercial parody, which sadly isn’t too far from reality:

Posted by Kristen McHenry at 10:45 AM

Hope you had an unforgettable vacation, Kristen, and you post more pics of it on your Facebook! :--)