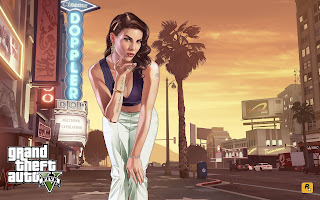 For reasons, I felt gritty and low-down and wicked this weekend, so I set about downloading “Grand Theft Auto 5.” I didn’t realize the process was going to take ten years. This game is a monster. I kept checking on the download throughout the day, but it wasn’t until 9:00 p.m. that it fully propagated on my system, and by then I was too tired to figure out how to get through the tutorial. I’m going to try again today. So far it’s quite loud and violent, and I’m stuck in the tutorial because I can’t figure out how to “take cover.” But I’m looking forward to playing someone mean and crooked. I want to steal cars and blow things up. I want to be bad and sultry and quick and criminal. I want to zip around L.A. in a flashy stolen vehicle and bask in the blazing California sun. I am tired of living a grim, responsible life in a cold, gray respectable city. I’m bustin’ out, folks. If the Feds kick my door down, it’s been nice knowing you.

I have been lamenting with one of my friends via text this weekend over our Terrible Medical Experiences of late. I don’t want to get into too much detail, but I suspect that a certain amount of age discrimination has been at play for both of us. I normally just go about my life, bopping along with my job and my workouts and my crafting pursuits, not thinking much one way or another about my age, until I run into a medical authority who wants to point out that it’s an issue. And ever since, I’ve been spinning out about it, mentally honing my knife and obsessing over the fact that this is now something that I have to be on constant guard against with every medical visit, and worrying that I am going to be dismissed and disdained because I am now officially an old. I am very on edge right now over an upcoming minor procedure, (everything’s fine) and it’s possible that I’m just being being hyper-sensitive, but it’s a little bit shocking to go around thinking of yourself as young and then have reality pointed out to you in a stark and less-than-sensitive way. Aging sucks.

I mentioned a few posts ago that I was in the market for a cool gym bag, and as much as I have looked and looked, I have been unable to find one that meets my arbitrary standards of hip and practical. There are a lot of ugly gym bags out there. I want the nice pink one the blonde lady at the gym had, but I can’t find anything close to it. Now I am wondering if I just imagined this glorious, long pink gym bag in my fevered workout dream. But I will keep looking. It has to be out there somewhere. And with it, I shall sail to great heights of gym success, and finally be able to achieve that elusive pull-up. Because it’s well-known that a cool gym bag is the key to one’s first pull-up.

Speaking of that, this is probably not riveting content for most, but I though this video on how to achieve a pull-up was pretty interesting:

Posted by Kristen McHenry at 1:50 PM

Argh, yes, the thrill of having your medico say indulgently, "that's something that happens as you age," as if that was an illuminating and satisfactory response. "Yes, actually I realized that, doctor: but I want to know is how to make it not go on happening as I age even more. Which I fully intend to do."

PS I completely loved that video. The pull up will happen, gym bag or no gym bag!

I love it, Kristen. You're so funny!