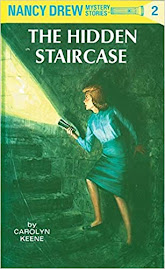 Folks, I am so excited I can barely see straight. Guess what I got in the mail last week? Drum roll please…A Nancy Drew Mystery Series Box Set! A box set! I was completely delighted and have already burned through “The Secret of the Old Clock” and started in on “The Hidden Staircase.” How, you may be asking yourself, did Ms. Typist find herself in possession of a Nancy Drew Mystery Series Box Set? Well, it’s a funny story. I was talking to my Mom on the phone and she said that my librarian sister sent her a Nancy Drew Mystery Series Box Set as something to read during the endless lock-down, and I was immediately overwhelmed with both nostalgia and envy. Like many young girls, I loved those books when I was a kid. Nancy Drew was a hero of mine, and those books were a big part of my literary development, not to mention my dream to become a private detective. (The private detective thing hasn’t happened yet, but there’s still time.) Mysteriously, a few days after the phone call, I got an unexpected package from Amazon and within, to my utter enchantment, was the cheery yellow box set complete with the first five books in the series, including the original cover art and line drawings. (Remember those?) I immediately texted my sister inquiring about the Mystery of the Yellow Box set, but she said it wasn’t her who sent it. It turns out, it was my mom. She heard my yearning and answered with Nancy Drew.

Having just finished “The Secret of the Old Clock” I have learned many astonishing things, among them that cinnamon cake topped with hot apple sauce is a thing that exists. Another is that we were once brave and hardy and healthy and wholesome. We knew how to do basic things like a change a tire, operate a motor boat and alter a garment. (Nancy does all three in the first few chapters alone.) I won’t go too far down the “we were better people then” rabbit hole, but it was a bit of a culture shock. The early Nancy Drew books were published in the 1930’s, and obviously it’s a whole other world now. We have lost a lot of competencies that used to be a given part of adulthood. Speaking of adulthood, it never occurred to me reading the books as a kid that Nancy is eighteen years old and living at home with her father with seemingly no plans for college or getting a job. For someone with nothing to do, she certainly manages to keep busy. And her Dad…can we just talk about her dad for a minute? I guess it must have been lost on me as a kid because I didn’t recall much about him, but Carson Drew is the best dad ever. He’s a kind and indulgent father, but he’s always pushing Nancy to think logically and to be courageous and make bold moves. And he raised Nancy as a single dad when her mother died.

Along those lines, I found it interesting how many of the characters in “Clock” had alternative living arrangements to the nuclear family. There were two cousins who lived together on a farm and made their living selling crops, sisters who were raising an orphaned child together, and Nancy herself, who lives with her father and his housekeeper. In fact, I don’t believe there was a single character in a nuclear family in the entire book. Most of the characters were struggling financially to some degree or another but they were getting by and they embodied stoicism. I can feel another bout of “we were better then” nostalgia coming on so I better wrap this up. The bottom line is, I have a Nancy Drew box set and I highly encourage you to obtain a box set as well...any box set. They are a thing of joy, no matter what your reading preference.

There are a ton of Nancy Drew shows and movies, but I couldn’t find any good clips, so here is an old Simon’s Cat classic, in honor of the foot of snow that was dumped on Seattle this weekend:

Posted by Kristen McHenry at 1:42 PM

Cinnamon cake topped with fresh, still-warm applesauce is a thing my Mom used to make when we were kids. Possibly she learned about it from Nancy Drew. I'll have to ask her.

"Characters should not age or marry," decreed the Stratemeyer Syndicate, among other guidelines. Really a fascinating enterprise. https://en.wikipedia.org/wiki/Stratemeyer_Syndicate