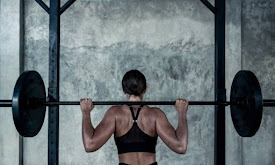 Over the last six weeks or so, I’ve been working with my trainer on learning the squat rack. I can now semi-competently dip under the (unloaded) bar, position it on my upper back, and lift it out of the rack without teetering wildly. It’s almost more of a balancing exercise than a strength exercise. And it’s the most frustrating and emotionally charged exercise I’ve learned to date. The first few times I did it, I felt genuinely angry. I resented the feeling of carrying that much weight on my back and my struggle to balance the bar properly. Even though I freely chose to learn it, it felt burdensome and chore-like. I’ve come to love the feeling of physically challenging myself and getting through hard sets, but somehow this one caused me angst—perhaps because it’s such a literal, physical manifestation of carrying weight on my back. I have weight to carry in my life and a part of me doesn’t want it. But each time I successfully lift that bar, my back gets more adjusted to the sensation of the weight, my body and brain work more quickly to coordinate properly, and the whole process becomes smoother. And I feel like I’ve won the fight--just like I plan to in life.

Speaking of winning the fight, after having played Stardew Valley to death, I’ve become obsessed with a new farming simulator called “No Place Like Home.” The premise is that the earth got so polluted and trash-laden that almost everyone peaced out to live in a pre-fab colony on Mars, and only you and a few stalwarts decided to stick around on earth, clean up, and start growing things again. It’s a very fun, colorful, meditative game, and deeply satisfying in that a great deal of time is spent vacuuming up huge mounds of garbage with a super-powered vacuum pack. It’s great...however the developers, in preparing for the full release of the game, released one patch and really cocked it up, then rapidly released another patch to fix the screw up, which made everything even worse. At first there weren’t enough goats, then there were a comical number of goats everywhere, then the goats vanished from your farm entirely, you couldn’t find the parts to fix the dam, the robots llamas went haywire, the dog you were supposed to tame glitched out, and the lady in the desert wouldn’t give you the final quest so you could move on to the Sunken City and find your long-lost grandpa. Also, they changed the previously relaxing sound of the vacuuming to a jarring, jangely, “pop, pop, pop” sound, instantly enraging most of the players, who ranted about it in en-masse on the Steam forums. It was a disaster, folks. You have no idea what I’ve been going through over here. I had to start over three times, and I’m just holding my breath and trusting that in this last iteration, everything’s finally been fixed. I’m not too mad at the developers though—they actually took the time to personally respond to one of my e-mails, and they seem to be really trying. It’s not easy to be a small indy developer these days, and I laud them for their efforts.

I mentioned on Facebook that my new glasses finally came in, and earlier than expected! The instant I got the text from the optometrist, I took off from work, dashed over to the eye doc’s, collected my new and glorious specs, and came home to pop out my contacts and try them on. The first thing I did was test out an old paperback poetry book that I’ve had on my list to read forever, but haven’t been able to with a 15-year old prescription. Voila! I was actually able to read the print. I wanted to cry. The new specs are so nice that I’ve even overcome my vanity enough to wear them to work a few times a week. Also, unbeknownst to me, it turns out that the frames are Kate Spade, so not only can I see, I’m also fancy. Look out world. I’m watching you—through my new, properly-prescribed lenses. I can see everything.

Enjoy this instructional video on how to cure chronic nice-lady-ness. I learned a lot!

Posted by Kristen McHenry at 11:18 AM