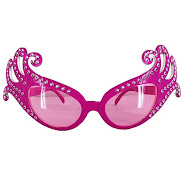 I like a good night snack and tend to cycle through a parade of popcorn, fancy crackers and blue corn chips with salsa as my favorites, swapping one out for the other when I get bored. Recently during a snack emergency (I ran out of fancy crackers), I stopped by my local drugstore and picked up a bag of something called “Pipcorn”, which I thought was just a cutesy name for popcorn. It turned out I was very wrong. I was puzzled when I opened the bag and found the tiniest kernels of popcorn I’d ever seen. When I looked at the back of the bag for an explanation, there was a long story about how this was a super-special, rare “heirloom” popcorn that had unique qualities and health benefits not possessed by normal, regular-sized popcorn. Unconvinced, I shook some into a cup and tried eating it, but the kernels were so tiny, mushy and tasteless I couldn’t bring myself to finish it. It was like eating the dust at the bottom of a normal popcorn bag--the undesirable dregs that sink down and get tossed out. Pipcorn, indeed. I can’t believe the manufacturer thought they would get away with such a stunt by calling it “heirloom popcorn.” I don’t appreciate having my night snack game messed with and I was miffed. Luckily, the next day was grocery shopping day, and I was able to obtain a bag of normal, right-sized popcorn of the kind that God intended.

My vision care saga continues. I was finally able to get an appointment with a new optometrist, but all is still not as it should be. I admit that in my desperation for a correct prescription, I deliberately attempted to trigger a bit of competitiveness by complaining copiously about my former optometrist and stating that I was looking for a new eye doctor who I could put my full trust in. Luckily, this doc knew an opportunity to peel off a patient from his competitor when he saw one, and stated that he, unlike my former eye doctor, believes in communicating with his patients and explaining to them the thought process behind his decision-making and ensuring that his patients are comfortable and happy with their eye care products. We went back and forth on contacts until he felt that he nailed the prescription, and gave me a sample of progressive contacts lenses to try out. I was just getting used to them when unfortunately, one of them got stuck on the lid in the case overnight and dried out and ripped, and I can’t get a replacement until they re-open on Monday. The second blow was that after an extensive consultation with their glasses expert, during which I found perfect, glorious frames and I was promised the moon for fantastic lenses that would help me see better when punch-needling, it turned out they would cost over a thousand dollars, and my insurance won’t cover the cost until March of next year. So now I have to call my insurance company this week and plead for an exception. I don’t think I can make it until March, so I’m hoping they take mercy on me.

Speaking of punch-needle, I made great headway over this long weekend on my tiger. He’s completely filled in and looking quite fierce. The only thing left now is the background, which I drew in free-hand yesterday. I will be making that trek to Joanne's soon, because I don’t like the shades of green of my current embroidery thread. I’m hoping to find full shelves brimming with goods this time, rather than alarmingly empty swathes of dusty space. 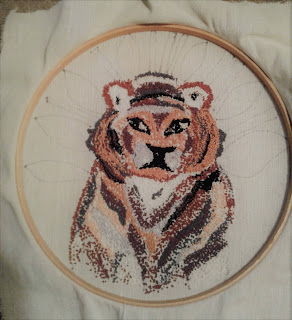 For the punch-needle curious, enjoy this simple tutorial to help you get started.

Posted by Kristen McHenry at 9:48 AM

Another workweek began with most enjoyable reading!