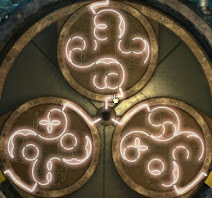 I got an e-mail a few days ago from Steam stating that Mr. Typist had bought me a game as a gift. I was very excited about my gift game, until I actually started playing it and realized that not only was it a Myst rip-off, but it was also chock-full of one of the things that I hate most in this world—spacial logic puzzles. This is not something I’m proud of, but my spacial sense has been broken since birth, and nothing ticks me off more than a spacial logic puzzle. They literally hurt my brain. I can’t with the lock box combinations and the shapes and the turning of rings and the water-wheel mechanisms. It’s infuriating. If I were a better person I would see this as an opportunity to improve my weaknesses, but the hell with that. My head hurts all the time now as it is, and I am not going to spend non-work time slogging through games that frustrate me, created by those who want to lord it over others that they can parallel park and do math in their heads. Full credit to Mr. Typist—the game did look cool at first glance, and he couldn’t have known. But I was literally almost in tears at the very first puzzle in the game, and I just can’t live my personal life that way.

I fled back to the comfort of Stardew Valley and finally got hitched to Alex, who moved in and set himself up in my farmhouse with the ugliest room I’ve ever seen. I wouldn’t have married him if I had known he was going to cover his floor with AstroTurf and stick up posters of footballers, Sports Illustrated models and beer brands everywhere. When I complained to Mr. Typist about it, he totally took Alex’s side, calling him a “good man” and fully approving of Alex’s aesthetic choices. Now I miss Elliot, who despite his hair obsession, had the good taste to move a library, a piano, and a reading desk into his room. These Stardew Valley bachelors are exhausting and I don’t know why I persist. Once you marry them they don’t really do much and they are always a mild disappointment. But I still have Sam, Sebastian and Shane to work my way through in other iterations of the game, before I branch out into the ladies. Leah and Maru seem pretty cool, so maybe I’ll try them out. At least I’m pretty sure they won’t decorate with AstroTurf.

My excitement about my 40-pound clean last week quickly devolved into the realization that I am no longer a young and that maybe flinging barbells around with abandon might not be the best thing for my back, especially now that I’m dragging a heavy laptop bag around with me everywhere. My back didn’t exactly “go out” but it came pretty close, and I had to go get a massage for damage control. The massage therapist was extremely concerned about my ankles of all things, and suggested that I go to a specialist to see about getting orthotics. He added that it was going to be hard to get an appointment because apparently podiatrists are booked up for months and months now because everyone is getting stress fractures in their feet from walking around at home all day with no shoes on. We are falling apart as a nation from all of this home-based working and I do not approve. We need to return to civilized living in proper offices with water coolers and social expectations. We can’t sustain as a nation full of people working pant-less and getting stress fractures.

In honor of proper working life, enjoy this clip of one of Michael Scott’s most cringe-worthy and hilarious moments from The Office:

"Working pant-less and getting stress fractures" is funny, Kristen. But I think you're absolutely right. Plus, I think the whole clothing and fashion industries are now just about kaput because of pandemic nonsense!