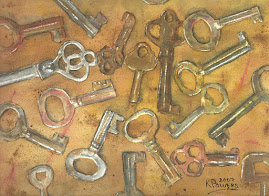 My big job change that I have been hinting at on this blog is that I have recently been assigned to multiple hospital campuses. And a strange and unexpected side affect of being at multiple campuses is key fatigue. There are so many keys to so many doors and cabinets and closets and storage units now. When I first started years ago at my original campus, (which I am back at now, in addition to a whole new campus and the one I have been at for the last five years,) there was a giant zip-lock bag stuffed full of unlabeled keys just sitting there in my desk drawer as if I would magically know what they were all for. At the next campus, it was upgraded to a lock-box full of keys. At least some of them were labeled, albeit vaguely (Daisy Box, 4th Floor Cabinet, Jim.) I gave up on the zip-lock bag, but I eventually sorted out all of the lock-box keys and ordered a key hanger and color-coded key tags. I labeled all of the key tags very clearly in big lettering and hung the keys just inside my office door, where they are frequently admired for their clever organization. At this newest place, there was a huge pile of keys loose on the desk, but someone helpfully took a photo of them and Photo-shopped text into the picture noting where they all go to. I appreciate that, but there are still too many keys, and now when I come home after taking Lyfts everywhere all day, I can’t remember which key opens the outside door to my apartment and which key opens the inside door. You would think that having lot of keys would make me feel secure and important, but instead it feels like an overwhelming burden. I need more key tags, and I need them stat.

Despite running around like a maniac all day due to my job situation, I am trying to keep up on the strength training since it’s the only thing saving my sanity right now. My trainer has had me working frequently with barbells of late in preparation for deadlifting, and she promised me that if I could get a “clean” on a 40-pound barbell, we’d advance to the deadlifting rack. For those who don’t know the weird weightlifting parlance, a “clean” is a little semi-hop/toss move you do to get the barbell up to chest level once you’ve lifted it to up to your hips. It’s really quite fun once you get used to it. I was struggling really hard to get the clean on forty pounds, but I finally did it! I don’t know how or why. I just walked into the gym one day, grabbed the forty-pound barbell, and got the clean right off the bat. It was sort of magical. I was even able to lift it over my head, but I cannot currently get it from an overhead position onto my upper back. My upper back needs a lot more strengthening. But I am proud and excited that I met my 40-pound clean goal! I am now inching closer to being like those women I admire who stalk into the deadlifting rack and nonchalantly load enormous plates onto the bar.

I recently got roped into buying one of the million zombie-shooters available on Steam, but this one was billed as possessing “a clever twist,” and having grown bored of farming and courting in Stardew Valley, I wanted something new. The premise is that you have seven game days to prepare for a massive zombie attack called the Bloodmoon Event, which happens at midnight on day seven. In the week leading up to it, you have to run around and find ammo and weapons and make traps and fortify your shelter. It is not going well, folks. In my first go-round, I totally nerfed the game settings, holed up in an abandoned church, set out a few spike traps, boarded up my doors, and figured I’d be all set. The zombies tore through the doors like they were tissue paper and immediately slaughtered me as I was staring at my screen thinking, “How did you get in here?” I have since watched numerous game-play videos and I realize now how tragically naive I was. Even on cakewalk settings, those zombies will chew through steel, dig through concrete, and literally breach bomb shelters. They are maniacs. After multiple in-game deaths, I find that I am having more fun watching game-play videos than actually playing the game. There are some really skilled and innovative players out there, and it’s way more fun to watch their ingenuity in action than to die over and over again because I suck at it.

I don’t see live-action game trailers very often, and I thought this one was cool. Enjoy!

Posted by Kristen McHenry at 10:43 AM

Love it, Kristen, and the trailer, too. I've been zombie buff for so long!

Oh Lord, your key situation makes me hyperventilate. I have nine keys in my life, which is way, way too many.

Congratulations on the 40 lb clean, brava!

Thank you, Patrick! :) And, Dale--I agree, nine keys is a lot. Before this dust-up at work, I had three keys and I was annoyed.