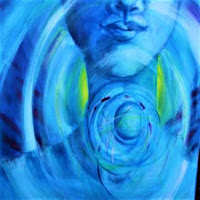 Every year for a work-related event, I have to do a Big Speech in Front of People, a feat which I greatly dislike performing and spend much time angsting over. This year, writing the speech has been like dragging through a slog pit of wet cement in full metal armor. All of the pieces were there, but nothing was flowing. It felt heavy and stilted and full of tortured metaphors (those are my specialty), and worst of all, it rang in my ears as strangely insincere. Last week, I closed my office door and blocked out a section of time to do nothing but focus entirely on the speech: No getting distracted and checking e-mail, no answering the phone, no running out to the lobby to solve problems that people should be capable of solving on their own. The mental space gave me the gift of clarity, and I realized that the speech sounded insincere because it was insincere. The word “authentic” has been thrown around so much that it has very little meaning anymore, but the truth is that the speech was not coming from my authentic self. I was keeping a key truth to myself because I didn’t want to be vulnerable. The minute that I opened up and said what was true, not just what I thought sounded the prettiest, everything fell into place beautifully. The words flowed, the tortured metaphors resolved themselves easily, the theme coalesced, and the speech finally sounded like it was truly coming from me. It still needs work, but the essence is there and I can stand behind it with peace in my heart now.

I continue to be enraptured by “House Flipper,” although its limitations are beginning to frustrate me. They are supposed to have an expansion pack coming out soon, and I wish they would hurry it along, because I feel like I’ve used every design combination possible by now, and I’m going to start getting bored soon. But the point of bringing this up is that as I was browsing houses recently, I accidentally clicked on and bought the most expensive house in the game. It used up almost all of my cautiously-built up savings and obliterated my methodically plodding approach to the property ladder. I had real feelings when I realized that what I had done was undo-able. It wasn’t a flop-sweats and panic-attack situation—I am firmly rooted in reality and I know it’s not real money--but I did have few minutes of mild freak-out. That led me to reflect on my life-long risk aversion when it comes to money. I have heard the theory here and there that women make better financial managers exactly because they tend to be more risk-averse. I don’t know if that’s true, and I don’t know if my financial risk aversion is related to my gender, but I definitely have that condition. I took a few deep breaths and talked it through with Mr. Typist. I realized that I could sell the house for a very high amount once it was finished, so the money wasn't lost, it was invested. And ironically, I made such a huge chunk of change on the house when I sold it that I was way ahead of where I would have been if I had continued to make timid little purchases out of a fear of loss. It was an interesting lesson.

At our session last week, I said goodbye to my trainer while he goes off to be a dad. He was a bit manic, but very happy. I’m glad for him. I kind of doubt that he’s going to come back, and if he doesn’t, I’m very grateful for the time that I’ve had with him. I switch over to the new lady next week, and I feel a bit anxious about it, which is slightly ridiculous considering that personal training is not being foisted up me in any way, it is something that I am  doing entirely of my own accord. It’s just that I’m used to my trainer. It took a very long time to get a rapport going with him and for us to understand and trust each other, and now I have to get used to whole new person and I don’t know what she’s going to be like. I’ve considered just being brave and doing this on my own, but I made a big advancement in being able to bench press an unloaded bar, and because I’m just in the beginning of learning to master that, I need the help. I’ve tried lifting it on my own without a spotter, but I get wobbly and I’m very scared of dropping the bar on myself and crushing my rib cage. This is what happens when you skill up. It just complicates everything.
Since this inexplicably popped up in my Youtube feed, and because it’s been raining for 700 years straight in Seattle, here is a great Nineties throwback video with Shirley Manson from Garbage, who my checkout lady at the grocery store flatteringly insists I look like. (I don’t, but I’ll take the compliment anyway.)

I bet your speech will be terrific!

I don't think risk aversion helps, but it's certainly better than risk denial :-)

& I hope your new trainer is good!