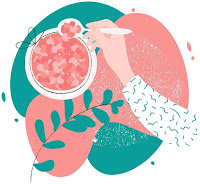 Because of a looming date of birth that involves a daunting number and its attendant psychological burdens, I have been a bit glum lately. However, one of my co-workers who I have become friends with offered to take me to the Korean spa to celebrate said date of birth, and no matter how glum I may be, I am never going to turn down a day at the Korean spa. I love it there. I hadn’t been for years and I don’t know why I don’t go more often. They have these dark, quiet, beautiful rooms with magical healing properties (the Salt Room is my favorite) and it’s warm in there and it smells good and they have hot tubs and a sauna and aromatherapy body wash in their showers. The only slight drawback is the nakedness, which is required in the tub room, but you get used to it. I got a salt scrub, which one also does naked. You lie there totally exposed on a rubber table for God and all to see while a wiry Korean woman diligently scours five layers of skin off your body and periodically pours a tub of hot water over you. It’s amazing. Afterwards you feel like a newborn babe and your skin glows like the moon. I had a great day and came home and took a nap-- all that sweating and relaxing really wore me out.

Many years ago, I wrote a poem about baggage, called Baggage. Over the weekend, I started working on a new poem about luggage. I like the word “luggage” because it’s more evocative. That’s what we do with it, lug it around. Pull it and push it and attend to it because it must be attended to at all times. Sometimes I wonder what would happen if I just stopped lugging my luggage around, but I don’t know how. I’ve lugged it with me for so long that I would feel slightly bereft without its burden. We’ll see where this goes poem-wise.

I feel dumb and I never know what’s normal with all of this physical training stuff, so when I talk to my trainer, I frame my most awkward questions in deflective terms because I'm crafty that way and it totally fools him: Do people ever develop body image issues as a result of you making them look in the mirror all of the time? I’m not saying I have that issue, I’m just asking. Do people ever start crying in the middle of a set, not that I’m going to, but do they? Do people have to fight the unhealthy tendency to compare themselves to others who are better and stronger and more competent at this than them? I’m not saying that’s my issue, but is that normal? And most recently: Do people ever get to where they can do pull-ups? I’m not saying I will, but do they? Most of the time, he indulges my inquiries with pragmatic efficiency and we get right back to work, but at the mention of pull-ups, I could almost hear the brakes screeching. He looked like he’d seen a ghost, and he got uncharacteristically jittery and said that pull- ups are very, very hard, particularly for women, and that some people never achieve them, even if they are super-strong, and that he wanted to be sure he was managing my expectations properly.

I don’t have any expectations—I’ve barely gone from train wreck to fender-bender in six months and don’t plan to enter a strong-woman competition any time soon, but I was a little saddened by his reaction. I really want to be able to do a pull-up. Even just one or two. In my mind, being able to do a pull-up is the definitive badge of strength and would be proof-positive that I’ve achieved something with all of this hysterical displacement activity at the gym. I understand that I have to be realistic--I am nowhere near the point where I can lift my own body weight. But now that it's been implied that a pull-up is not within the realm of my physical capabilities, I desperately want to achieve one. I am trying really hard to let go of desire around this, and eventually I will, but right now it feels like someone pointed to a shiny toy in a shop window and told me I could never have it. In all fairness to my trainer, he didn’t come right out and say no in so many words, so maybe there’s still a chance. We’ll see how it shakes out.

I was looking for some “strong woman” songs for this week’s video but it turns that I find most songs of that ilk to be grating. I’m not much of a church-going sort and don’t have any particular religion anymore, but I came across this video and I really liked it. It cheered me up with it’s wholesomeness, sense of community, and positive vibe, and I needed that this week. Enjoy!

Posted by Kristen McHenry at 3:24 PM

Oh, you can do a pull-up eventually! But yeah, men's shoulders give them an unfair mechanical advantage, with pull-ups. There are plenty of women in really good shape who can't do one -- it's something you have to train for specifically. You might not want to pile a huge amount of effort into it when there are goals nearer to hand that would make more sense. (Or then again, you might want to anyway: these physical competence goals are sometimes stubbornly rooted, and quite motivating.) Pull-ups are hard. Three years ago I couldn't do one. I can do exactly six of them,now, after losing 70 lbs and training for three years. & I treasure every one of those measly six :-)

That's great, Dale! That's actually quite inspiring, so thank you. Six is really good. The trainer said that even the most super-strong women can't always achieve a pull-up, but it's sort of become my unicorn now. I don't expect to be able to get to it right away, but it's something to work for down the line. I'm glad you understand. :)