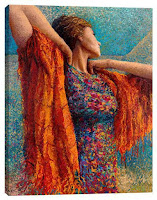 I’ve been reading a rather interesting novel called “Nine Perfect Strangers” by Liane Moriarty, in which nine delightfully disastrous people from varying backgrounds arrive for a stay at a very chic New Age spa. Part of their “treatment plan” involves several days of silence, which all of the characters are struggling mightily with. I was reminded of the time years ago that I went on a retreat in which we had a day of silence. A number of people at the retreat had a very hard time with it, but to me, it was pure heaven, and I would have signed on for a full year of it if I could. Don’t get me wrong--this does not make me spiritually superior in any way. The silence simply appealed both to my introversion and my social laziness. I was appalled to realize how much energy I had been expending saying things I didn’t really mean in order to smooth things over or make other people happy. I also realized that, not even being the loquacious type, I could talk ninety percent less than I do and get along just fine in the world, and I suspect most others could, too. We have become of nation of natterers, chatty Cathy’s, clacks and blabbermouths, an alarming number of whom make a profession of it. In order to begin healing the country, we all need to just shut up for a while. There’s too much dialogue. I would be all for a federally-mandated National Day of Silence, or maybe even a week.

I have a big crafty goal to weave a scarf for my friend, but I didn’t want to try to do it on my spindly, fussy little pin loom, so I went to Joanne’s today and bought a set of proper straight looms and some wonderful pink fluffy yarn. As always when I am trying to learn something new and technical, my incipient dyslexia reared its ugly head with a roar, or more accurately, a frustrated whimper, as I tried to read the inscrutable instructions and puzzle out what the lady on the Youtube video was doing. I’m trying to tell myself it’s good brain training to force myself to learn the process, and that’s true, but it doesn’t make it any less maddening, and it certainly doesn’t stop the flood of painful childhood memories of always being behind and having a hard time learning things. I still don’t know my right from my left and my spacial abilities are nil, so trying to translate “clockwise” and “counterclockwise” from my brain to my hands is a stop and start process and probably won’t imbed in my muscle memory until I’ve woven about eighty scarves. That’s a lot of scarves. (Anyone need a scarf?)

Speaking of scarves, here’s a poem I wrote a while back. It’s the appropriate time of year to dust it off and put it on display again:

The world stands perfectly still.
The world hasn’t moved an inch in weeks.
Crows have gone under, dreaming
that Spring lies limpid in their beaks. Earth
is off the hook entirely.
We shall expect
nothing of it. What’s required now,
my friends,
is scarves—not for their warmth
but for their brilliance: Lime and
scarlet, fire and turquoise,
coral, fuchsia and polished plum, plumage
fanned around our pallid necks, its dazzle
meant to send a message
in no uncertain terms:

We will not
ourselves go bald and
rigid as the trees. We will not be frozen out.
We will explode against the deadened
backdrop of these times, marching
through the gray wind
bearing our floppy,
luminous gems. We will be fearless.
We will show the winter that our colors
have been at last reclaimed—
that we do indeed,
remember gaudy Summer,
its mesmerizing hues.

Great post, Kristen, and a fabulous poem. You are incomparable!