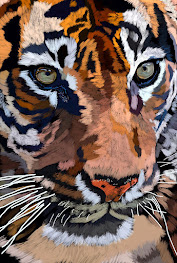 My brain has departed for vacation a week ahead of my scheduled time off, and as such I did nothing this weekend but sit around working on my long-neglected tiger embroidery project and watching bad Woody Allen movies on our newly-fixed TV. It felt good to do something with my hands. That poor tiger has been haunting me from the corner of my living room for months, a constant reminder of my crafting failure. I got sick of looking at it in its unfinished state. I realize now that part of my blockage with it has been that I was afraid to fill in its face. The face is precision work and I didn’t want to botch it, but once I was able to start getting the face in, the tiger started to come to life and I was newly-inspired. This is my first punch-needle project working with embroidery thread, and it’s been an experiment in technique and patience. I finally found the right thickness of thread and developed the dexterity and mental fortitude to unspool it without freaking out and destroying the entire coil of thread in a frustrated tantrum. I am becoming friends with embroidery thread, and I think this is the way I am going to work moving forward. I love how much precision and detail I can get using thread rather than the more blunt instrument of yarn. I don’t know what I am going to do with the tiger once it’s finished, but I’m thinking it needs to be attached to something bad-ass, like leather pants or a motorcycle helmet. 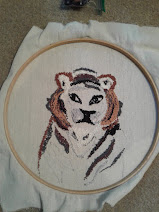 One of the bad Woody Allen movies I watched was “Irrational Man”, about a dissolute philosophy professor who decides that murdering a corrupt judge would be a moral act, and proceeds to do just that. The movie is a weak shadow of “Crimes and Misdemeanors” and I think the film was a total waste Joaquin Phoenix, Emma Stone, and Parker Posey’s talents. I found nothing at all compelling about Abe Lucas, the main character. I thought he was boring, emotionally stunted and completely lacking in a moral compass even before he decided to commit murder. The more interesting aspect to me was the way the two main female characters were portrayed—both as irrationally in love with that idiot, but the younger woman, Jill, played by Emma Stone, as ultimately having more strength, courage and sense of self than the older, more experienced and sophisticated Rita, played by acting great Parker Posey. The only pleasure I got from the film was when Abe met his just ends at the bottom of an elevator shaft. The other movie I watched, “A Rainy Day in New York” also wasn’t great, but it was mildly funny and cute and featured Selena Gomez as a deliciously mean young woman who put the spoiled main character Gatsby in his place. *Sigh.* I miss the old Woody Allen.

Grocery shopping has always been somewhat fraught for me even before COVID, and since then it’s become a veritable gauntlet. They changed the rules some time ago and the courtesy clerks will now deign to bag your groceries again if you bring your own bags. I guess they decided COVID isn’t festering on the surface of every re-usable tote after all. During the long bagging ban, I became somewhat of a virtuoso at bagging my own groceries. I Have A System and I don’t want it messed with, so I try as politely as I can to let the baggers know that I’ll take care of this task. This somehow inflamed the ire of a certain elderly courtesy clerk, who was at first merely miffed by my bagging independence and has recently escalated his ire into open hostility. He started by stalking off in a huff every time I told him I would bag my own groceries, then he started hectoring me about my cart, then he began looming aggressively at the bagging area, watching everything I did and commenting on it. The last time I encountered him, he was in full territorial mode, taking up as much space as he could in the bagging area. I told him again that I prefer to bag my own groceries, and he squinted his eyes and growled, “Yeah, I know who you are. The lady that bags her own groceries.” Then he proceeded to stand there attempting to crowd me out until I finished bagging everything and bolted out of there. I would complain, but the guy is like 90, and his bagging gig might be the only thing he has left in life. I don’t want to be responsible for ruining his last years by grouching about his behavior, as obnoxious as it is.

Since I have tigers on the mind, enjoy this Survivor video from 2009.

Posted by Kristen McHenry at 11:33 AM

Your tiger embroidery is looking great, Kristen. And thanks for the video. Now I feel like watching Rock III again! :--)