It Came from Within Them All Along 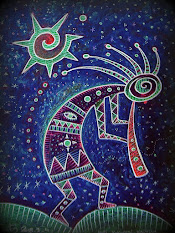 At the gym the other day, I went to go hang my keys up on a coat hook before my workout and I noticed that my beloved and long-possessed sterling silver Kokopelli key chain was missing from my keying. At first I was a little disoriented and couldn’t remember if that was actually the ring of keys that I kept it on. I’ve had that key chain for almost twenty years, so long that I don’t visually register it anymore. It was quite confusing until I rapid-cycled through the stages of grief and accepted that it was somehow gone. I bought that key chain almost twenty years ago when I went on a retreat to Sedona, Arizona with a group I was involved with at the time. The woman who sold it to me told me that the Kokopelli was symbol of good tidings in marriage, and having just gotten married, I snapped it up eagerly and have kept it on my key chain every single day since.

When I came home and started combing through my purses and pockets looking for it, Mr. Typist asked me why I was so obsessed with it. I told him the story behind the original purchase, and to my surprise, I found my eyes welling up with tears. “I always thought that maybe it helped a little,” I confessed. I know that’s superstitious and magical thinking and all of that, but over the years I have come to think of the little engraved Kokopelli as a guardian of our marriage and secretly thought that no matter what happened, as long as I held onto the key chain, everything would be okay. I do realize how patently absurd that it, but I’ve always had a tendency to imbue inanimate objects with mystical powers, even while knowing that’s silly. It’s just something that has always comforted me. Always in stories, the protagonist comes to realize that it was never the object that gave them their power but that it came from within them all along. Maybe the key chain went missing because I don’t need it anymore and it’s my time to have this realization. And maybe it’s time for some other realizations too, about things that I have held on to past their date of usefulness to my life and my growth. (Not my marriage—Mr. Typist and I doing just fine, at least from my point of view.) But other things.

I don’t know what happened to my Kokopelli key chain. It’s unlikely to have just fallen off the key ring, which means that someone might have actually taken it. I don’t lock up my keys at the gym and maybe someone saw it in the locker and wanted it for some reason. If that’s the case, that person’s crops are going to fail and they will be plagued with infertility and ill livestock, so the joke’s on them. Now I guess I’ll have to look around for a new key chain to imbue with mystical powers. This opens up a whole new world of possibilities: Serpents and wolves and eagles, oh my. We’ll see what I land on. In the meantime, enjoy this strange and musically compelling performance:

Posted by Kristen McHenry at 11:06 AM

So sorry for the loss of your keychain.

Wretched, thieving primates! They're all over the place, spoiling everything.

(Or Kokopelli's on a secret mission, saving future friends from unknown dangers, and will be back unexpectedly. Hard to know.)