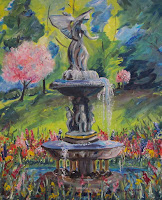 Game married life in Stardew Valley has been going...okay. I’m not going to say that marriage to Harvey is a let-down, but truth be told, it turns out he’s a bit on the dull side. Sweet but boring, and neurotically concerned about my health. He constantly chides me to avoid sunburn and inflammation and stress, and tried to convince me to stay out of the mines because they’re dangerous. (He’s right, but I need iridium ore to curry favor with the town wizard.) Also, he rubbed the Great Soup Debacle of last season in my face by telling me that he hopes I’m going to provide “something of good quality this year.” He also cooked me a Big Country Breakfast which he then ruined by telling me to make sure I eat a “reasonable portion.” But all in all, I suppose I can’t complain. Sometimes he waters the crops or feeds the animals. And he periodically promises that he will be forever loyal to me, which is reassuring because there are some devious home-wreckers in Stardew Valley and they’d make the moves on my man in a second if he gave them an opening. I’m looking at you, Haley.

I’m beginning to lose my mind with the home gym approach to fitness. I’m sooooo booooored. A few days ago, my little set-up which I was so proud of in the beginning suddenly seemed woefully inadequate. I needed new toys and I needed them immediately. My subsequent sweaty-fingered search on Amazon sent me down a rabbit hole of home fitness horrors that both amazed and bewildered me, including portable home gyms that had more parts to them than a 1,000-piece jigsaw puzzle, torturous-looking ab tighteners, and an array of pointlessly gendered exercise bands. I don’t want exercise bands “for women.” All that designation does is make me immediately suspicious that they aren’t going to have enough tension for me. I already have that problem with the bands that came with my weight bench. It’s like working out with cooked spaghetti noodles. In the end I settled for a set of fabric bands (non-gendered) and a rope-looking doohickie that says it’s rated for fifty pounds. Although I was tempted just to satisfy my morbid curiosity, I managed to resist purchasing this nightmarish contraption:

It’s like strapping a hoop of suckerfish around your middle. And I know the lady in the picture didn’t get abs like that by using this thing. I wasn’t born yesterday, Amazon

It’s been slow going, but I am continuing on with “The Fountainhead.” It’s taken me time to get used to Rand’s prose, which at first I found awkward, but now I find beautiful. It’s a stunning book and I am kicking myself that I didn’t read it sooner. I actually had to stop in the middle of a passage recently because I needed to think about its astonishing philosophical implications. This is not a brag—I’m not all that intellectual and I don’t go around pondering philosophical implications on the reg, but this one touched me very deeply. I haven’t had that feeling reading a book in ages, that feeling of heady, reeling excitement, of grazing the hem of an astounding idea that shakes me spiritually and awakens something very deep within me. I’m almost afraid to pick the book up again because I have a feeling that once I step through this threshold there will be no going back. This feels life-changing to me. I will talk about it in more depth at some point, but I will say that I believe that Ayn Rand’s philosophy has been deeply reviled and misunderstood. And allowed myself to fall for it. I’m totally at fault for dismissing her for so long because I believed the bad press. She’s beyond brilliant and I think what she has to say is absolutely vital considering what is happening on the national stage these days. More to come on the architects my friends. More to come indeed.

Since we are ending a grand note, enjoy this thunderous rendition from “The Phantom of the Opera.”

Posted by Kristen McHenry at 1:56 PM