Too Many Conifers, Puffy Ginger vs Ripped Adonis, Hospital Update 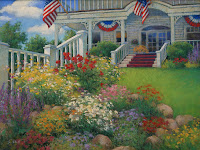 Lalalalala, nothing is happening. We are not in the middle of a permanently life-altering pandemic and I know this because in my world, the world of House Flipper, everything is going swimmingly. I recently entered my first gardening contest and I scored full points! This means that I sold my house for fifty percent more than it would normally go for, bringing my total net worth to a cool 2 mil. See? It’s all great.

In preparing for my big win, I read up on the ins and outs of the garden contest, and I found it very revealing in regards to what Europeans think of Americans. (I believe the game is made in Poland.) There are four garden categories: English, Crop, Modern and American. There are certain elements required for each one, and for the American garden, (which I did because this is ‘Merica), it must include, bizarrely, a pizza oven, a barbecue grill, a picnic table and chairs, and a hammock. “Interesting,” I thought. “Someone thinks Americans are food-obsessed sloths.” But then I read further and saw that it must also include at least three pieces of “outdoor” gym equipment and a swimming pool. So which is it, Europe? Are we lazy slobs or fitness-obsessed narcissists? The other odd thing is their ideas about conifers. To win, your American Garden must be chock full of conifers. Conifers, conifers, conifers. Can’t have enough of them, apparently. I wanted to shout the whole time I was adding more and more conifers, conifers do not grow in every state in the U.S.! But ultimately, I won, so the joke’s on them.

I was so fist-gnawingly bored with my normal workout this weekend that I agreed to play “Workout Roulette”, in which I committed to performing whichever workout Mr. Typist chose for me at random from YouTube. It turned out to be Hannah Eden’s “30 Minute Core and Upper Body Workout.” I hadn’t previously encountered this Hannah Eden person in my YouTube fitness travels. She’s a bit much, but the workout was incredible, so I can’t argue too much with her aggressive style, both in presentation and fashion. She has long, brilliant fuchsia hair that she wears in a high pony tail, and shiny red high-top shoes. She shouts a lot about doing better and endurance and setting goals and crushing it and pushing through the burn, which I thought was something that went out in the 80’s but now is apparently back in. Then, as a “mind over matter” inspirational sermon, she bragged about her bicycle trip through Iceland. I complained to Mr. Typist afterwards that I could have done without the inspirational Iceland bicycling story. To his credit he snorted and said, “Iceland’s not that big.”

I’ve noticed that a lot of these workout videos now very cleverly have three performers in them, one to do the hard-core version, one to show the intermediate variations, and one hapless newb to demonstrate the beginner’s form. In this one, Hannah’s husband is the intermediate guy, although clearly the dude is an elite body-builder and athlete. Next to him was the beginner guy, a pale, puffy ginger with a slight belly. I actually don’t even think he had that much of a belly at all, but he was standing right next to the oiled, tanned, six-packed Adonis who was at least a foot taller than him, so it made for a very unfair visual comparison. I don’t know how the puffy ginger dude felt about all of this, but he seemed to be good sport, plus he got lots of extra attention from Hannah, who made a big point of going over to “help him” frequently during the workout. So maybe it was worth the trade-off of having to stand right next to the super-fit guy. Personally, I found him a lot more likable than Adonis anyway, so he has that to hold on to. I am still working on solving the mysterious link between female fitness gurus and the high ponytail. I will get to the bottom of it.

Things at the hospital are still very hard and stressful, but it does appear that we have successfully avoided the massive overwhelm of our system that we had prepared for. Now it will be about how to slowly reopen and again and bring normal services back online. They brought in a guy specifically to help with this, so we’ll see how it goes. My job still won’t return to what it was for a long time, though, and I really miss it.

Here’s a lovely garden song from the ever-harmonious Peter, Paul and Mary. Enjoy!

Thank you for reading and commenting, Steven! I always enjoy your take. Iceland is not that big at all. So...whatever, crazy ponytail lady.

Such an enjoyable post, Kristen. And the PP&M song I haven't heard in a lifetime. Both such a great way to start off Monday!

We look to you, Kristen, for the solution of the high ponytail link!

I am a poet. I am from India. I like your blog. I always take inspiration from others to learn.
It is said, “Everyone has something to teach us”.
I have a blog. Please visit mine and leave your comments.

Thank you for sharing such a awesome post. I love it so much.Check Office Furniture Miami