Who can spread his hours before him, saying, “This for God and this for myself’ This for my soul, and this other for my body?”   ”On Religion” by Kahlil Gibran 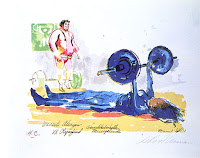 In between bouts of eating dragon souls in Skyrim, I spent some time this weekend working on another poem in the new series I’m developing. I’ve written a fair number of poems about The Body: What I have and haven’t done with my own, my general disconnection from it, and its various and sundry batterings, most of them self-inflicted. Many of those poems are very dark. I had forgotten just how dark until I went back and read some of them recently and found myself alarmed by their brutality. With this new series, I am consciously trying to take a different approach—not an insincere, rah-rah positivity approach, but one that comes from a place of genuine gratitude and appreciation for what my long self-maligned body is able to do—it’s adaptability, it’s capacity to learn, and shockingly to me, it’s hidden strength. One cannot, I have discovered, simultaneously malign one’s own body and effectively strengthen it.

I came to weight training with many wounds around my life-long lack of athleticism, being too tall, spindly and uncoordinated in my younger years to be able to do any sports, anger about my knee never getting properly fixed, never “clicking” with a sport or a physical pursuit, and feeling hopelessly limited. The weight training has tuned me into my body and its physical workings like nothing else has. It’s been a hard and uneven and sometimes painful process, but it’s taught me a lot, including that perennially favored spiritual buzzword, “presence.” I practiced regular meditation for years, and it never got me anywhere close to the presence I’ve discovered when I’m pushing through muscle fatigue and self-doubt trying to get three more reps in on the leg press, and the world shrinks itself down to nothing but me, the sound of my heartbeat, and that plate I’m pushing out with the sheer force of my will. That clears my brain far more effectively than sitting in a lotus position and trying to release desire ever did.

I know that for most people, the ability to set a physical goal and execute on it is a normal, non-earth shattering experience, but for me it’s been huge. I literally didn’t know I was capable of it. I am stunned to find that I enjoy the physical sensation of pushing myself hard, overcoming my physical fatigue and my mental self-doubt, and seeing progress. It’s strengthening me both in body and mind. In essence, I am finding the spiritual through the physical, which is the last place I ever would have looked. In all honestly, I always had a slight contempt for people who I deemed “too into” their physicality. I made the incorrect assumption that they didn’t have anything going on in their brains and that they didn’t have very much depth as people. I was wrong to let my bitterness blind me in that way, but I’ve turned over a new barbell and shall move forward all the wiser for my mistakes. This new series will be an evolution of my poems on The Body. I don’t know where it will take me, but I’m interested to see what emerges.

Speaking of the realm of the spirit, I recently came across some poetry by Kahlil Gibran, and I have become entranced, enthralled, enchanted, enraptured and mesmerized. (I’ve been using the thesaurus a lot this weekend.) I never paid much attention to his work before and I never read “The Prophet” or otherwise actively sought out his poetry. I guess I just thought it was a 60’s hippie thing and mentally dismissed it. But after reading these poems, I was deeply moved and immediately used my Christmas Amazon gift card money (thanks, Allan and Sandy!) to order his Collected Works, which should be coming soon. I’m very excited. I have a whole lot of time to make up for and I’m looking forward to a three-way date involving me, our couch, and Gibran’s lyrical mysticism.

Posted by Kristen McHenry at 9:57 AM

I love what you have to say about meditation vs. weight training. That's a beautiful insight.

Thank you, Jason! I appreciate it.