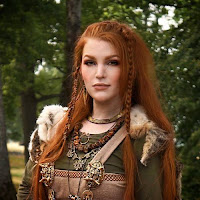 As we are wont to do, this morning Mr. Typist and I slathered our melanin-challenged skin in SPF 11,000 and zipped off to the annual Pacific Northwest Scottish Highland Games in Enumclaw. In case you haven’t surmised already, as a rule, I am an adamant avoider of all forms of public fun. I dread the summer festival season, what with the people and their merriment and their enjoyment of the outdoors and their eating of delicious things at food trucks. Ugh. However, I do make one exception, and that’s the Highland Games. The crowd size feels manageable to me, and it is chock full of everything I love—Celtic jewelry, Celtic bands, Celtic clothing and art, red-haired women swanning around confidently in Ren Fair garb, and huge plates of bangers and mash. Also, the massing of the pipes and drums, which is a sight to behold and one that never ceases to bring a tear to my eye.

Today was especially enjoyable because we spent quite a while watching the Women’s Caber Toss. If you’re not familiar with the Caber Toss, it looks something like this: (Men’s toss clip chosen because I couldn’t find a brief enough one of the women’s.)

The contestants basically hoist this gigantic, heavy wooden pole in their hands and try to flip it over in the air so it lands neatly at a twelve-o’clock position. It is really hard, folks. And those women Caber Tossers have arms like you wouldn’t believe. I was just starting to feel excited about the tiny cords of muscle that have started to form in the general area of my biceps when I saw these women and their insanely jacked arms, and I looked down at my own and sighed the universal sigh of the perpetual 90-pound weakling. Then I asked Mr. Typist what he thinks those women do to work out their arms, and he replied without missing a beat, “Throw around women like you.” I studiously ignored him and watched the lady caber-tossers with joy and fascination. They were having such a great time. They danced wildly to the hard-rock music that was being piped into the field speakers, they good-naturedly harassed the scorekeeper after every decision, and best of all, they really cheered each other on. They were so happy for their competitor’s successes. It didn’t feel like a competition, or rather, it felt more like they were competing with themselves instead of their rival Caber-tossers. They clearly wanted to do well, but it was all taken with a grain of salt and in a spirit of sisterhood. There are not many female caber-tossers, and I imagine that they need to stick together.

What else: I waited grumpily for 30 minutes in the hot sun for a super-oily plate of fish and chips that it turned out was not a good idea for me to eat, I looked at a lot of over-the-top printed T-shirts, velvet Druid capes, and hippie dresses, and I bought a bracelet, which is an unusual choice for me, because I have very sensitive wrists and can’t stand the feeling of anything sliding up and down on them. But this one is elastic, fitted to my wrist, and made of abalone, which is a…stone? A substance? Anyway, it is a material that I have been brought into contact with more often than usual of late. I was very drawn to an abalone necklace I found recently and I have been wearing it a lot, and now, the bracelet. According to the wisdom of the New Age internet, abalone combines the concept of serenity and strength in equal measure. Abalone healing carries energies of protection and emotional balance and…get this…apparently it’s good for building muscle! It also brings with it a natural shielding that blesses the person holding it with tranquility. And it is especially helpful for those going through emotional turmoil. So maybe there is something to all of this. I like to think so, if only for my own loopy edification.

I was not able to get any good video of the massing of the pipes and drums, but here is a nice one from a previous year:

I love this! I also cry at the pipes EVERY TIME. I believe abalone is a shell. xoxo

Hi, Vanessa! I hope you're doing well. Thank you for reading.