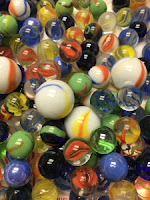 This week, I have been reflecting on trust and its role in my life. Speaker and writer Brene Brown has a theory that trust is akin to a jar of marbles. She explains that her daughter’s teacher keeps a jar of marbles in the classroom. When the students are behaving and being kind to each other, the teacher adds marbles to the jar. When the students start acting like little jerks, she removes some marbles. If and when the jar gets filled, the class gets to have a party and celebrate their awesomeness. Brene says that the marble theory also is true of people in our lives—they earn metaphorical marbles by gaining our trust through right action.

I have come to the realization that the blessing and the curse of my being is that with me, everyone starts with a full jar of marbles. It’s automatic. Here, you get a full jar and you get a full jar, and even you, who I have doubts about, well, what the heck, you get a full jar, too. I just go around handing out of full jars like they were candy. Others are more judicious with their marbles. For example, when I explained my marble methodology to Mr. Typist, his eyes narrowed and he said that with him, people might start with a quarter of a jar of marbles…at most. I know some people, many in fact, who give out only empty jars and expect others to earn every marble they get. But not me, nosirree Bob--with me, if you want marbles, you got ‘em. And the odd thing is, I think I’ve pretty much come out even on this. There have been some outliers, but by and large, most of the people in my life have lived up to their full jar of marbles. I realize that this is reckless of me and that it probably reflects badly on my character to some degree—it speaks to being overly-agreeable and lacking in a certain circumspect mindset, but in the end, its worked out, and it’s saved me a lot of time.

After months of me carefully practicing gun range avoidance, Mr. Typist has inspired me to get back into the game again by showing me a photo of a .38 revolver that he thought I might like. I am very excited about the .38 and really want one of my own. I’m going to take one of my much-piling up vacation days some time this month, head off to the range, and practice on a .38 to make sure it’s what it I want—then take the plunge into purchasing one for myself. I’ve decided to stop feeling bad about preferring revolvers over semi-automatics. Most of the Youtube gun ladies make a lot of noise about how women should never allow a gun store clerk to steer them towards revolvers, because it indicates that they don’t think your delicate lady-hands can handle a semi-automatic. But the fact is, I truly love and prefer revolvers. They are far more beautiful and elegant than semi-automatics, I like the old-school look and feel of them, and for a gun novice like myself, I just feel a lot more comfortable with them. Frankly, I’ve been pretty depressed lately, and it feels nice to have a goal, even a small one like purchasing a revolver.

Well, I’m off to the pool to shake off my doldrums and get my blood pumping. Depression will not win! In the meantime, enjoy this clip of Brene Brown, and if you are so inclined, check out her other stuff, too—her talks on vulnerability are very good.