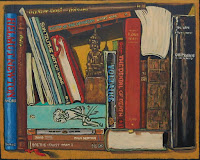 Unintentional Spring cleaning has come to the Typist household of late, but rather than serving to tidy things up, it’s caused widespread chaos. First, there was the aforementioned filing, which I did actually tackle last weekend, causing allergic reactions from an explosion of dust and masses of toxic ink particles released from shredding five year’s worth of old paper. Then….there was the rat. I’m not going to talk about the rat. It’s too upsetting, and it’s currently unresolved. Experts are coming over to assess. I can’t think about it. I’m just ignoring the fact that the contents of our hall closet are currently strewn all over the living room floor and under no circumstances am I to open the hall closet door.

But the big one is our bookshelf. I shall explain: Those Little Free Libraries that are getting popular are now everywhere in my neighborhood, and they’re like catnip to me. I cannot not stop and browse through them when I see one. I also can’t not take a book that I’m interested in. However, I have been violating the Little Free Library social contract by not contributing books as equally as I procure them, or let’s face it—by not contributing at all. The other day Mr. Typist suggested I “pick out a few books to give away” and we could do a Little Library stroll during which I could make good on my debt.  I smiled and nodded agreeably in an attempt to hide my rising panic. “Pick out a few books to give away”??? That would be akin to picking out a few of my children to put up for adoption. My books are my precious. I have cultivated a beautiful, and my mind, pristinely organized collection of poetry tomes and classics, and I could not possibly let go of any of them. “Pick out a few books”, indeed. What a monstrously callous suggestion. After I sulked about this for a few days, I decided to go ahead and take a quick look-see just in case there were some old ragtag undesirables that had escaped my attention and made it onto my bookshelf without my approval.

This led me down a “500 Hats of Bartholomew Cubbins”-like worm hole, wherein I kept pulling books off of the shelf and they somehow continued to proliferate faster than I could get them into the give-away stack. I couldn’t understand it. I’m not a hoarder, a clutter-bug, or a pack rat. Yet the bookshelf told another story. By the end of it, I discovered seventeen fancy journals and notebooks, most with only five or six pages filled in, eleven unused sketch pads of various sizes and paper weights, eight different boxes of colored pencils and art pens, a doodle instruction book I had forgotten about, six adult coloring books, and of course, numerous books of both fiction and otherwise that I don’t even recall having purchased, much less read. I also found scrapbook paper, art deco decals, a small collection of decorative frogs, and loose photos of Mr. Typist and I from our brief honeymoon. I found a chessboard, some old collages I made years ago, the World of Warcraft Rise of the Lich King Collector’s Box Set, random folk song sheet music, my Baby Book, and inexplicably, some dried wheat. I also found an instruction book from the 1950’s on how to draw naked ladies.

I don’t have any explanation for myself. By the time I was done sorting everything, I had four towering stacks of books to give away, a full Hefty bag of old journals for recycling (written pages torn up and thrown into the garbage), and another bag full of general refuse. Strangely, after I put the surviving items back onto the bookshelf, it was completely full!  My bookshelf has confounded physics. It’s still a mystery to me. It’s as though the bookshelf magically expanded to accommodate my ever-increasing, unconscious hoard. It looked fine from the outside. I mean, yes, some of the shelves are bowing a little bit here and there, but that’s natural. It looked, to my eyes, like a tidy, logically organized and not at all cluttered island of literary goodness. I am shocked to realize that all of this time, I have been hoarding in plain sight.

The upshot of it is that I now have more than enough books to make up for my book-indebtedness. I am going to be like the book Santa Claus! The entire neighborhood is going wonder who the mysterious Book Lady is, depositing all of those beautiful books far and wide and increasing the literary intelligence of the neighborhood exponentially. And I’ll have one, lone remaining sketch pad in which I can draw dried wheat and  naked ladies if I so choose.

Posted by Kristen McHenry at 4:14 PM