Last week I promised to follow up on my new resolution to be more present and break the multi-tasking habit. This week I made a conscious effort to slow down and focus fully on one thing at a time, and surprise, surprise, I felt less exhausted and a bit calmer. I still caught myself multitasking on more occasions than I would have liked, but just  going into work with the intent of being more present made a difference. I’m nowhere near being the next Eckart Tolle, but at least I managed to eat my lunch while only reading e-mail, instead of reading e-mail, texting, talking on the phone, worrying obsessively about the future, and ruminating regretfully on the past. From here on out, I will worry and ruminate separately. That’s progress, folks!

Yesterday, I journaled a bit, inviting in the next idea, seeing if any new inspiration was ready to leap from pen to page. Nothing really happened. I found myself writing about a truck, a green and rusty ’77 Chevy that will figure prominently in a story that I’ve wanted to write for a while, but then I realized I’m not ready to write that story yet. That story comes with a lot of pain and grief, and it’s not the right time for me be mucking around with it, pulling the essence of all of that heartache out of the ether. Not yet. I want to write something fun and light, or perhaps strange and slightly horror-tinged, but I don’t know what. In the meantime, I’m exercising a great deal of self-control by not trying to re-read or edit my novel. I still need more distance. But I’m also okay with this creative fallow period. It seems natural, even necessary. I don’t feel panicked or blocked. I’m just here, waiting and open to whatever presents itself to me.


After having played Aion for a few days, I can say that it’s wonderfully bizarre. I haven’t played very many games with an Asian influence, and this one is strongly influenced by S0uth Korean pop culture. My avatar, a purple-haired mage, wears long, flowing colorful gowns, (but so far hasn’t managed to get her hands on a pair of pants longer than her thighs), and often spontaneously sprouts wings, floats up into the air and spins around in a dazzling array of colored lights. Her spellcasting is accompanied by baby-voiced nonsense words that sound like “Acuberdapen!” and “Gredurduran!” Strange but oddly cute monsters abound, and even their violent deaths are accompanied by little exasperated squees instead of tortured moans. There is a lot of flying, and the game seems a bit obsessed with wings, all of which are beautiful and ornate. There is a preoccupation with embarrassment and shame in the quest storylines, and a great deal of over-thanking and excessive apologizing. The game doesn’t take itself too seriously, which I appreciate. It’s very mentally soothing, like an electronic version of cotton candy spun on a rainbow cloud. The only part about it I find slightly disgruntling is that after you’ve played for an hour, a message pops up that says, “You’ve been playing for one hour. Please take a break!” Excuse me, but I am a grown-ass woman with a job and responsibilities, and I do not wish to be judged in such a manner. If I want to play a silly video game for more than hour, that is my decision and mine alone. I’ll also eat cookies before dinner, run with scissors, and stay up past my bedtime if I want to. So there, Aion! 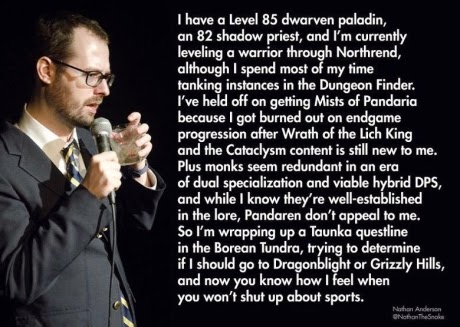 Posted by Kristen McHenry at 1:50 PM