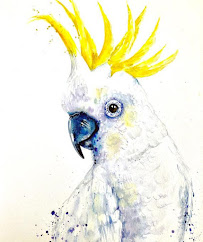 Yesterday, with the full encouragement of Mr. Typist, I initiated a “Stay in My Pajamas All Day” campaign. It worked out pretty well, meaning that I managed to actually do it. I parked my butt in my chair, I didn't go to the gym or take a shower, and I only looked at work e-mail once (a big mistake which led to ten minutes of swearing and empty railing against “the system.”) I did pretty much nothing other than drink an entire pot of coffee and order a series of video games from Steam that I immediately gave up on the moment they became difficult or mildly confusing. I also got overly-involved in the fate of Tuca, a lost-and-found bird featured on Facebook who was denoted as a “super-judgey” snow-white parrot or macaw or some sort--I’m not good with bird types—who by all accounts is very rude and openly mocked the staff of the Kitsap Humane Society. I loved him immediately and on sight. The minute I saw the post about him, I wanted that bird so badly. I didn’t realize all of this time that what has been missing from my life is a judgey, sarcastic bird. Mr. Typist and I no longer have cats to judge us and find us lacking, so there has been this huge vacuum in our lives, and also, I am very drawn to albino animals. I consider them to be sacred, even the sarcastic ones. Especially the sarcastic ones. I really hope Tuca finds his people again, but if somehow he doesn’t, I am totally up for adopting him. He has thrown my birdological clock into full-on tick mode.

With a potential Biden presidency, there has been much excited talk about dogs returning to the White House The absolute last thing I care about is a presidential dog. A presidential dog does not interest me in the least. While I don’t understand them, I respect non-dog people for realizing that they are not dog people and not obtaining dogs. It’s also not lost on me that no one is ever excited about the prospect of a presidential cat. For some reason, cats are always under suspicion as being vaguely un-American. They do not care about your agenda and they don’t put up with your crap. With cats, the onus is on you to be curious, to reach out, to offer respect, to be patient. Cats don’t need humans in the same way as dogs do, and humans take deep offense to this. But earning the respect of cats yields great rewards. And cats are the purview of writers (who are also under constant suspicion of being vaguely un-American) perhaps because they are calm, they respect silence, naps, and boundaries, and they always have other options besides you. Presidents are mandated to have dogs. Everyone understands loyalty and happy tail-wagging. Cats make you work for it, and that does not provide the instant emotional crack that a dog does.

I guess I’m just going to talk about animals for this entire post. One of the afore-mentioned games I gave up on heavily featured a fox, which makes two games now I have given up on involving foxes. Apparently I am a sucker for foxes. You shove a fox in my face, and I’ll buy your damn game. I really wanted to make this last fox game work out. It was quite lovely and touching for about an hour, before I got completely lost and confused by the “fuzzy logic” of the runes and the lights and the arctic flowers and the lit stones and the damn wind chimes and I couldn’t take it anymore. There is a time and place for uncertainty and “intuitive knowing” and now is not it. Their shiny spiritual fox and arctic landscape are delightful, but I can’t do any more brain work. I am mentally in the market for a certain, linear path.

Because why not, here is a full hour of birds in a forest. Enjoy!

Posted by Kristen McHenry at 10:39 AM