Gym-Related Pop Culture Discoveries: The Good, the Bad and the Horrifying 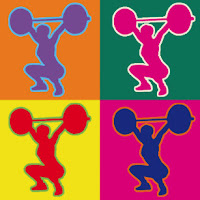 In my middle-aged dotage, I find myself mostly immersed in my little corner of the world: my job, my neighborhood in which my job happens to reside, my apartment which houses myself and Mr. Typist, and surprisingly, my gym, which has become a pivotal location in my life as I go through this weight training process, which has been a net good, but daunting both mentally and physically. As such, I’m cut off from the bleeding edge of most pop-culture doings. However, the weight training has introduced some new, niche cultural matters to my life, some fascinating, some horrifying, and some both.

I’m not sure how this happened, but I recently suffered a long, slow-motion fall down a YouTube fitness rabbit hole. I wasn’t looking for this, but you know how YouTube pops up videos that it thinks you will like based on other things you’ve watched? I was looking for advice on how to achieve an unassisted chin-up when I came across an angry, possibly roided-out personal trainer ranting about some other YouTube-famous personal trainer, who, in this personal trainer’s estimation, was incompetent, a complete moron, and giving dangerous fitness advice to the naïve and gullible. I quickly discovered that this was not a one-off. There is an entire subculture of YouTube fitness trainer stars whose careers seem to pivot around posting shit-talking videos about their fellow fitness gurus. It’s quite remarkable, and very loud.  It’s also strangely addictive. Maybe it's all the free-flying testosterone, but I find it weirdly compelling.

However, I have gotten one positive thing out of it—it led me to power lifter Meg Gallagher’s videos (she goes by Meg Squats). I have found her videos to be informative, well-done and entertaining, and she doesn’t post mean videos about other female power lifters. She has a great sense of humor and a fun personality, and she gives solid, practical advice on strength training for total newbs like me. She’s also not above getting uber-girly every now and then and nerding out about make-up and cute workout gear. And her totally jacked arms inspire me, although that’s not a look I’m aiming for. She has also been through some bad stuff, including a violent childhood and a binge eating disorder that she suffered with for years before getting help. So she seems far more real to me than a lot of the run-of-the-mill fitness bunnies out there. And most delightfully, she opens all of her videos with the greeting, “Hello, my strong, strong friends!” It makes me tear up sometimes, especially when I’m struggling.

However, it also put me in touch with a grown man who thinks it’s a great idea to go by the moniker of “Swolenormous.” He’s pretty much the entire reason that normal men like Mr. Typist dread the gym and don’t want to go. His persona is exactly as cartoonish and over-the-top as you would expect from someone who calls himself Swolenormous and does all of his videos shirtless, but admittedly, he lives up to the “swole” part of it. If you can get past his abrasiveness and his Thor hair, he does seem to sincerely care about helping people. He’s a b.s.-caller-outer, but he offers more than that. He’s very well-educated in fitness and nutrition, and is sincerely concerned about the health crisis we are suffering as a society due to poor food quality and the proliferation of bad nutritional advice. I just wish he his message didn’t tend to get lost due to his somewhat...blustery personality.

Unfortunately, by watching his videos, I was introduced to something horrible that I had never heard of before called “Mukbang.” Apparently, this trend originated in Korea and involves people eating enormous amounts of food on camera. The entire idea makes me sick and I haven’t been able to actually watch one of these for any length of time. I have a fairly pronounced case of misophonia (a repulsion at hearing the sound of food being chewed), and the idea of watching people eat anything, much less excessively, makes me break out into a panicked sweat. How anyone finds that kind of thing remotely pleasurable is beyond me. The world is a weird place.

Bottom line is, ladies and gents, please do not go hunting around on YouTube for fitness and nutritional advice. That is a circle of hell that will lead you to breatharianism and other abominations that will bring nothing good to your life.

In trying to chill out a little from all this fitness absurdity, I downloaded Fallout 4. Now that I’ve gotten the hang of it, I’m finding it enormously fun and absorbing. It’s set up so that you can do a lot of different things, including totally ignoring pain-in-the-butt quests you don’t want to deal with and just focusing on building up a settlement if you’d rather do that instead. I don’t know what all of the rancor was about with the bad user reviews. I think it’s really fun, and I get to have my fantasy dog in-game; a loyal German Shepard who tirelessly attacks my enemies.

Okay, finally—after cycling through numerous Spotify channels at the gym, including ZZ Top, Sabaton, Church of Heavy Metal, L-7, Hole, and Dorothy, I recently branched out into…rap. Which I have always disliked. However, this guy named Zuby has been making the rounds on some of the podcasts I listen to, and I tuned into his channel found that I actually like his music. It’s fun and melodic, but mostly very confident, wherein he refers to himself in the first person, pats himself on the back for his overall awesomeness, and expresses no surprise that he has achieved some level of stardom. (He also wrote a fitness book.) Zuby loves himself some Zuby, and I don’t blame him. Nonetheless, I am always astounded at the frankly confident, being nowhere near one of them, and I vaguely believe that if I listen to enough Zuby, maybe his zeal for himself will wear off on me a little, and instead of fighting dysmorphic inner monologues at the gym, I will start thinking, “Ms. Typist is the bomb!” Oh, who I am kidding. I will never start thinking that. But maybe I won’t be quite as dismayed at the sight of myself struggling through the “modified” (weak-person) lunges my trainer makes me do when he thinks I need to be taken down a notch.

Enjoy this video by Zuby, and think well of your fine selves!

Posted by Kristen McHenry at 4:33 PM

In point of fact, Ms Typist is the bomb.

Very informative as well as fun to read post!

Aw, thanks Dale! :) And you thank you Master Poet. I'm glad you found it informative and enjoyable to read. I wasn't so sure about this one. I'm glad it came off ok.

Escorts in Lahore is the best key word to search call girls in Lahore
we serve best and VIP escorts in Islamabad also.